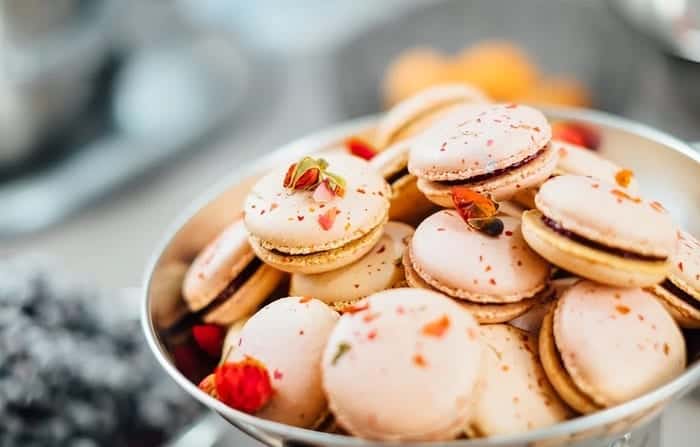 Aquafaba is a natural substitute for egg whites that’s 100% vegan and can be used in a variety of recipes, from savory to sweet.

Legend has it that aquafaba became “a thing” in 2015 when Goose Wohlt, a vegan software engineer, made a comment in the Facebook Group “What Fat Vegans Eat” about how delectable meringues could be made without using egg whites. Needless to say, this was groundbreaking information for many. It was one of those “one small step for humans and one massive leap forward for people, the planet, and animals” moments.

Most often, aquafaba refers to the juice from chickpeas, but the juice from other beans has the same properties, as does the liquid from a package of tofu or a can of peas. If you slow cook beans, the liquid in your pot becomes your aquafaba, but it’s easiest to just get it straight from a can (and use the leftover beans for salads and other recipes.)

The discovery of aquafaba for cooking is so groundbreaking because in the cooking and eating worlds (two very big worlds) egg whites were a lot like cheese. Before vegan cheeses started to get really, really good (thank you, Miyoko!), cheese lovers around the world couldn’t imagine going vegan because they just couldn’t live without cheese. And for many chefs, especially those who love to bake, the idea of cooking without the fluffy help of egg whites was unthinkable.

Enter aquafaba, otherwise known as bean juice – as in the kind you usually pour down the sink when you open the can. Turns out, there’s liquid gold in that stuff. In the same way that egg whites can be used to make custards and crusts light, fluffy, and smooth, aquafaba lends the same qualities to a dish.

Besides being easy and versatile to cook with, as an egg replacer, aquafaba is a welcome alternative for people with dairy and nut allergies. Furthermore, the fewer eggs we humans consume, the fewer chickens will live lives of ongoing physical and emotional suffering.

How to Cook with Aquafaba

When used in baking or even cooking savory dishes, two-to-three tablespoons of aquafaba can replace one egg white. Every recipe is different, so be sure to follow the directions provided by the vegan chefs who create the recipes or, by all means, experiment to your heart’s content with this superstar ingredient.

Like me, you’re probably starting to get hungry, so without further ado, here is a collection of ultra-yummy aquafaba recipes:

In this video, Chef Ashley Alexander shows you how to make a creamy plantbased alternative to dairy butter using aquafaba.

Mary’s Test Kitchen offers a variety of recipes made with the magical bean juice, and this vegan mayo will fool all your carnivore friends.

You don’t have to wait for morning to serve up this out-of-control-good vegan French toast from Goodful.

A Virtual Vegan created this recipe for crispy potatoes that have don’t use any oil. These potatoes put aquafaba into the upper echelons of super tasty, crowd-pleasing comfort foods.

These delicious aquafaba meringues with strawberries by the Happy Pear will put a smile on your face (and so will the video.)

The Vegan Corner is proof positive that going vegan is not about deprivation. This lemon meringue pie recipe is just the thing for springtime picnics or other special occasions when you want to taste sunshine.

Hello. Thanks for visiting UniGuide. My name is Kristen and I started UniGuide as a tribute to nature, animals, and spiritual exploration. I hope you enjoy your experience here!

I donate 1% of UniGuide's revenue to animal welfare, wildlife conservation, and environmental charities. Learn more on About UniGuide.

UniGuide uses cookies to provide you with the best experience while visiting. By clicking “Accept," you consent that you are ok with this.
UniGuide will never share or sell your personal information..
Cookie SettingsAccept
Manage consent

This website uses cookies to improve your experience while you navigate through the website. Out of these, the cookies that are categorized as necessary are stored on your browser as they are essential for the working of basic functionalities of the website. We also use third-party cookies that help us analyze and understand how you use this website. These cookies will be stored in your browser only with your consent. You also have the option to opt-out of these cookies. But opting out of some of these cookies may affect your browsing experience.
Necessary Always Enabled
Necessary cookies are absolutely essential for the website to function properly. These cookies ensure basic functionalities and security features of the website, anonymously.
Functional
Functional cookies help to perform certain functionalities like sharing the content of the website on social media platforms, collect feedbacks, and other third-party features.
Performance
Performance cookies are used to understand and analyze the key performance indexes of the website which helps in delivering a better user experience for the visitors.
Analytics
Analytical cookies are used to understand how visitors interact with the website. These cookies help provide information on metrics the number of visitors, bounce rate, traffic source, etc.
Advertisement
Advertisement cookies are used to provide visitors with relevant ads and marketing campaigns. These cookies track visitors across websites and collect information to provide customized ads.
Others
Other uncategorized cookies are those that are being analyzed and have not been classified into a category as yet.
SAVE & ACCEPT